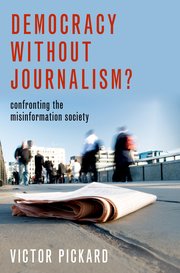 For those who are interested below you can find the link for Victor Pickard's book talk at Oslo Met: